All eyes are on Apple once again as the company prepares to unveil a slew of new devices Tuesday. Who are the leaders most responsible for cementing Apple’s place in the permanent limelight? Bloomberg reports. (Source: Bloomberg)

From Wicked Problems To Wicked Opportunities – For Leaders And Entrepreneurs

Insanity is doing the same thing over and over again and expecting a different result. – Albert Einstein

Interesting video about “wicked problems” and how to turn them into “wicked opportunities”. Thinking material for leaders and entrepreneurs.

END_OF_DOCUMENT_TOKEN_TO_BE_REPLACED

How are organizations budgeting for innovation? What’s holding innovation back? What technologies are considered innovative? Who benefits from innovation? And how do you spark innovation? This infographic gives you all the results and provides a roadmap for what you should … Continue reading →

Twiplomacy is the first-ever global study of world leaders on Twitter. The governments of almost two-thirds of the 193 UN member countries have a presence on Twitter: 45% of the 264 accounts analysed are personal accounts of heads of state and government, but just 30 world leaders tweet themselves and very few on a regular basis.

This study shows that while the social network invites direct interaction between users, few world leaders take advantage of this opportunity to develop connections. Almost half of world leader accounts analysed don’t follow any of their peers. A quarter of world leaders and governments follow President Barack Obama and the White House, but @BarackObama and the @WhiteHouse have established mutual Twitter relations with only three other world leaders: Norway’s Jens Stoltenberg, the UK Prime Minister and Russia’s Dmitry Medvedev.

European Union President Herman van Rompuy (@euHvR) is the best connected world leader with 11 mutual follows. Australian Prime Minister @JuliaGillard is the second most connected world leader. Many governments use Twitter as an automated news feed from their website or Facebook page. As of 1 July 2012 the 264 accounts enjoyed a combined following of 51,990,656. 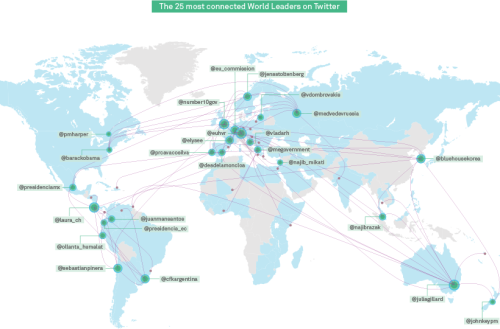 We love the Olympics, but an international social media showdown is a little more our speed.

Ignite Social Media is back with the 2012 Social Network Analysis Report, breaking down demographic, geographic and search data that shows which networks are the underdogs and which are mounting the winners’ podium.

Here at Mashable, we can’t get enough GIFs and hashtags. We’re excited to see that this type of digital currency is gaining value — Twitter and Tumblr are among the top five networks with the strongest rate of growth. Pinterest, Reddit and LinkedIn round out the pack.

Launched just over a year ago, Google+ was included in the report for the first time this year but is notably absent from the list of fastest growing platforms. And while Facebook is actively continuing its quest for world domination, it’s hard to improve your growth rate when practically everyone’s already joined the club.

You just might feel a few pangs of nostalgia looking at the decliners, especially Digg, Myspace and — wait, Friendster still exists? For the Diggers out there who are still holding on, the site’s re-launch just might revive the network. As for the others, things are looking pretty grim.

Comcast’s Plaxo boasts the oldest and the wealthiest users, statistics that unsurprisingly go hand in hand. Social travel network WAYN and review site Yelp also ranked high in both of those categories.

Check out the graphic below, with data based on a report from Ignite Social Media. It also features statistics about men versus women, the youngest skewing networks and which sites are luring in the whiz kids. The researchers at Ignite point out that social network search interest continues to remain stagnant, as it has since 2009.

The restaurant and food industry is embracing the mobile movement more than other business sectors, according to a new infographic.

DudaMobile, a service that makes websites mobile ready, found that 28% of small to medium-sized businesses in the restaurant and food industry have a mobile-friendly site, from pizzerias and bakeries to food trucks.

This category is far more advanced than other industries looking to reach out to smartphone users, including professional services such as locksmiths and attorneys (16%), health and wellness including spas and salons (10%), travel and tourism such as hotels (8%) and automobile/transportation (6%). Retailer was number six on the list (5%) for small to medium-sized businesses…Read More