The Olympics are over, and whether you were watching or not, you probably couldn’t avoid their sponsors’ ads.

Unmetric, a service that tracks brands’ online presence, collected data leading up to the Games to see how sponsors stacked up against each other.

“The Olympics represent the grandest stage in all of sports, bringing together the greatest athletes from around the world. This grandness and competition is mirrored by the brands sponsoring the event in their efforts on social media,” says Unmetric CEO, Lux Narayan. “Within this competitive landscape, brands are doing their best to become the business equivalent of Michael Phelps. This report looks deep inside their efforts to decipher who’s actually winning on Facebook, Twitter and YouTube.”

Coca-Cola took the lead across all networks in numbers, though McDonald’s followed close behind. The fast food chain also responded to fans more quickly than all other sponsors. Watch company Omega lacked the numbers of its competitors, but compensated by posting more engaging content. On the other hand, Panasonic consistently fell behind in most categories.

Overall, Coca-Cola reigned supreme in both numbers and engagement; this is largely due to their Move to the Beat campaign, which allowed fans to upload homemade music videos. Other sponsors lacked similar integrated campaigns.

Which Olympic moments and events made Twitter users in the U.K. smile most?

Heptathlete Jessica Ennis, tennis star Andy Murray and distance runner Mo Farah all brought loads of joy to their fellow countrymen during the Games, according to new data from the utility company EDF Energy.

You may have heard of EDF Energy — they’re also the folks who turned the iconic London Eye ferris wheel into a nightly light show reflecting social media sentiment during the Olympics. The company enlisted social media experts, linguistics analysts and algorithms to keep a finger on Britons’ digital pulse during the games. Their findings over the past two weeks are presented in the infographic below.

Overall, Twitter users in the U.K. registered a “positivity reading” of 64% during the Games, meaning more than six in 10 tweets expressed positive feelings, reactions and emotions. That number jumped to 90%, though, when Ennis took the heptathlon gold, and 82% twice — first when Murray won the the tennis gold, and again when brothers Alistair and Jonny Brownlee took the triathlon gold and bronze medals, respectively. Farah pushed the positivity meter up to 76% when he won the 5,000 meter race on Aug. 11.

Britons’ biggest buzzkill? National positivity fell from 86% to 71% when native daughters Victoria Pendleton and Jess Varnish were disqualified from the women’s team sprint on Aug. 2.

Forget London. Much of the 2012 Summer Olympics action is happening on Twitter. Athletes have used the social network to share photos and status updates that take their followers inside the Games. Fans have used it to revel in Olympic drama and — in the U.S. — tweet result spoilers for viewers stuck waiting for NBC’s tape-delayed primetime coverage.

How did all the Twitter chatter stack up over the event’s first 10 days? Mass Relevance, Twitter’s official social curation and integration partner, tracked the tweets to produce the infographic below, which shows just that.

Through 10 days, there were more than 28.4 million Olympic-themed tweets, according to Mass Relevance, and users worldwide sent an average of 2,000 tweets per minute. Swimming led the charge as the most talked-about sport, followed by gymnastics, basketball, soccer and volleyball.

American swimmer Michael Phelps was the most-discussed athlete, with 574,000 mentions. He was followed by American basketball star LeBron James, British diver Tom Daley, Jamaican sprinter Usain Bolt and American hooper Kevin Durant. But look for Bolt and other runners to surge up the rankings over the second half of the Games, when much of the Olympic attention turns from swimming and gymnastics to track and field.

Interesting to note is that Daley was at the center of one of the Olympics’ biggest Twitter-centered stories so far. After a disappointing medal-less performance in the men’s synchronized diving championships, he used Twitter to out a troll who sent a hateful message referencing his late father. The interaction gained widespread attention and the troll was later arrested on suspicion of malicious communications.

Check out the following infographic for the full picture of how tweeters followed the Olympics.

What Do You Know? – Americans And The Olympic Games – Infographic

Are you an Olympics expert? If you’re like the 500 social media users who responded to Lab42′s market research, you might be surprised how little Americans know about the Olympic Games.

For instance, is one of the Olympic rings orange? What does the word “Olympiad” mean? Of course, you’ll know which sport Michael Phelps competes in, and perhaps you’ll be wondering what happened to the 7% of people who had no idea.

Find out more Olympic answers with this infographic.

The Beautiful Game Is The Most Searched Sport In The U.S. – Infographic

The 2012 Olympics are being hailed as the “first social Games” — but looking at old-fashioned search terms is just as fascinating as following the online conversation.

Would you have guessed that soccer was actually the most-searched sport in the U.S. the week before the Games? Even though most nations are not sending their best soccer players to the Olympics, the beautiful game grabbed more than 12% of all Olympic sport-related queries.

Next up were swimming, track and field, basketball and gymnastics.

But interest varies by area. Women’s soccer drew the most searches on the West Coast, as well as the Northeast and South Atlantic regions. In the central South and Rocky Mountain areas of the country, as well as Alaska and Hawaii, the Games’ opening ceremony ruled supreme.

Midwesterners were the only population segment to search for swimming more than any other sport.

Also of interest: the Midwest and central South regions seem to be especially randy — they are the only two regions to have “hottest Olympic athletes” rank in their top five search topics.

This is according to a study by online advertising and data analytics firm Chitika Insights. The company analyzed more than a hundred million ad impressions to gather the data presented in the infographic below.

Among other interesting findings: more than a third of 2012 Olympics searches were made from mobile devices; more than four in five searches came from a PC; New York had the most disproportionate interest in the Games relative to population; and Arkansas, New Mexico and Missouri had the most disinterest. 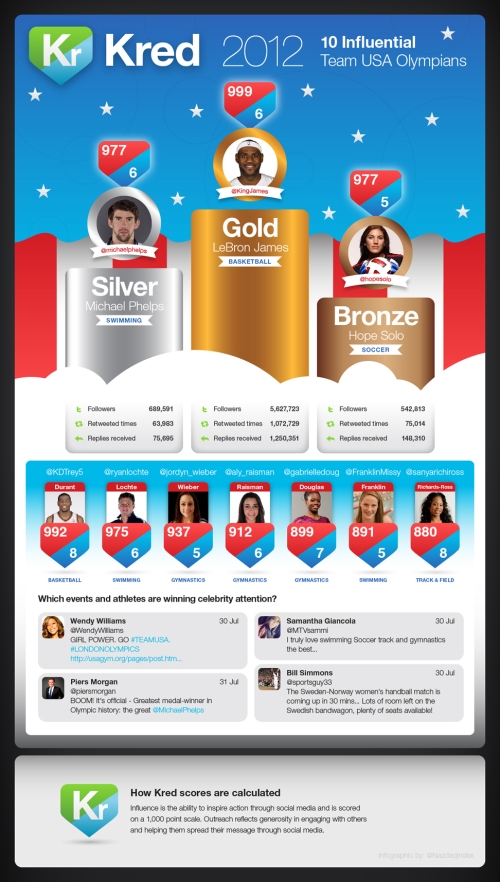 Other top influencers include basketball scoring machine Kevin Durant, swimmer Ryan Lochte and gymnasts Jordyn Wieber and Aly Raisman. This all comes from the social media analytics company PeopleBrowsr, which recently pulled data using its Kred influence measurement tool to create the infographic below. Kred’s algorithms measure Twitter reach and influence, as well as how generous users are about interacting with their followers.

On a 1,000-point influence scale, James tops out at 999, while Phelps and Solo both score 977. But Phelps beats her out with a slightly higher engagement rating. Durant, it should be noted, beats both Phelps and Solo but apparently there’s a cap of one medal per sport.

Measuring social media influence is especially relevant for this year’s Olympics, which are seen by many as the world’s “first social Games.” Social media use has exploded since the last summer games, and the International Olympic Committee has ramped up its social presence.

Some athletes feel unfairly constrained by social media sharing rules, however. National Olympic committees, meanwhile, have already booted two athletes — a Greek triple jumper and a Swiss soccer player — for tweeting racist messages from London. And, after a medal round flop, British diver Tom Daley responded to a hateful social media troll by publicly outing him on Twitter earlier this week.

Which Olympic Event is Going To Win On Social Media – Infographic

Buzz surrounding the Olympics continues as fans gear up for the most social and digital game ever — but what exactly are they talking about?

Your Twitter feeds have likely been filled with common terms like “London,” “gold,” “torch,” or “athletes,” among other sporty words. According to Networked Insights, who created the infographic below, most of the chatter is coming from the greater New York City area.

Out of all the sports in the summer Olympics, basketball received the gold medal for being the most discussed online.

Do any of these stats surprise you? What sport are you most excited about? Let us know in the comments below.

Sexy Athletes Of The 2012 Olympics – Video

The Evolution Of Olympic Communication – Infographic

We recently took a look at how the exponential growth of social media since the last Summer Olympics in 2008 will reshape this year’s Games in profound ways. But tracing the evolution of Olympic communication back more than 2,000 years proves just as fascinating.

Forget livestreams, score alerts and Twitter — back in the day, Olympic results were delivered by homing pigeon. Then the advent of the “modern” Games in 1896 came during the same year as the introduction of the wireless telegraph. The first Olympic radio broadcast came more than a quarter century later, in 1924, and 1936 saw (get it?) the first live telecast. In 1960, the Games were broadcast worldwide for the first time ever. Finally, the 1996 Games in Atlanta were billed as the “Internet Olympics” — offering the first real sign of what was to come in 2012.

The network solutions company Acme Packet recently dug up all these stats and more from a variety of sources from around the web to produce the infographic below.

Among Acme Packet’s other notable findings: a billion people will receive updates, get results and watch events via digital devices this summer; mobile traffic worldwide is expected to increase by 211% during the London Games; and the Olympics’ estimated operating cost this year would be enough to cover more than 10.5 billion hours of international Skype calls.

Even more impressive though? By the time Rio 2016 rolls around, there will be more mobile devices than people in the world, and this summer’s “first social Olympics” will seem antiquated by comparison.