The Rise Of Smartphones: Demographics And Facts – Infographic

This infographic indicates how smartphone evolved this generation and how many users do we have in the world.  There are an estimated of 7 Billion population in the world and it took about 16 years before it reached 1 Billion smartphone users.  With fast technology upgrade nowadays, it will only take another 3 years to reach 2 Billion users.  As the population rises and smartphones enhance its features, more individuals will opt to get one.   These smartphones has been used by many adults in the United States.  There is an estimated of 45% adult smartphone users and 85% use cellular phones.  Smartphones being mostly used are Apple iPhone, Motorola, HTC, Nokia, Samsung, LG and a lot of tablets are now available.  In a study conducted showing device ownership by age group, there are 628 people ages 16-29 years old and 2, 309 people ages 30 plus was involved.  These percentages show how many of this population own high-end gadgets.  It shows that 11% of 16-29 years old age group are using tablets and 10% are 30 plus years old.  95% of these people have smartphone 85% of them are over 30 years old.  80% of lower age group have desktop/laptop but only 73% from people aged 30 plus have this.  Only 7% of younger individuals own an e-reader but 11% of older ones use this.  In the US, smartphone owners had been studied in specific age groups.  There are 14.6% users aged 55 plus, 15.2% users between 45-54 years old, 20.7% from age group between 35-44 years old, a higher percentage of 25.6% from age group between 25-34 years old. 17.2% from ages between 18-24 years old and a lower number of users which is 6.3% from ages between 13-17 years old considering the price and the income of each household.

This infographic also shows the market share of operating systems of smartphone subscribers from top smartphone platforms with 3 month average ending July 2012 vs. 3 month average ending April 2012 from US subscribers ages 13 plus. Google has the highest point of change between April and July, next is the Apple which has 2% point of change, -2.1% for RIM users, -4% for Microsoft users and -5% for Symbian users.  Android have as high as 68.1% of its operating system, 16.9% for iOS, and lower percentages for other operating system like Windows, Linux, RIM and Symbian but in 2006 before iOS and Android came out, RIM has the highest usage followed by Linux, Windows and Symbian.  PalmSource had also been used as well as other operating systems.

The biggest global manufacturer is Samsung with 32.9%, ZTE has 32.6%, Apple has 16.9%, Nokia has 6.6%, HTC has 5.7% and other brands have 5.2%.  Device manufacturers that include smartphones and non-smartphones show that Samsung has the highest share of smartphone subscribers but with a point of change of -3% between April and July 2012.  Apple shows to have a 1.9% point of change, LG has -8%, Motorola has -1.3% and HTC has 0.4%.from the top mobile OEMs.  Smartphone applications per platform show that Android and iOS are nearly equal with 100K difference in its number of users and Windows has the lowest among the three.  More and more people are using Android and just recently, Android hit 25 Billion downloads where Apple has as much 6 months ago.  There has been more than $100 Billion spent on mobile media globally in 2011 alone and it will continuously grow.  American households has an average spending of $1,110 in 2007 for phone services alone and a little much of $1,226 in 2011 with $67 rise in each family for phone services while food spending went down to $48, apparel fell by $141 and $126 for non-phone entertainment like books and other gadgets.  This shows how smartphones have been dominating more on expenses of each household that family members could sacrifice other necessities to sustain their phone services monthly.

The Downfall of RIM – Infographic 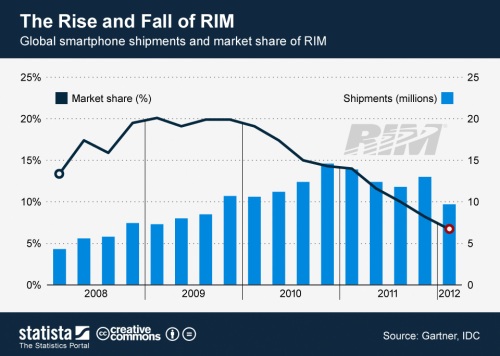