Many C-level executives have distinctive formulas to reach business success, and some of the techniques are surprisingly peculiar. Does your pursuit of corporate victory by way of traditional practices need adjusting? We’ve collected some extremely successful CEOs’ unconventional habits to prove that winning isn’t always about staying inside the lines.

Why Nike’s CEO Is Being Compared To Steve Jobs

Apple CEO Tim Cook may not be Steve Jobs, but he’s still the right guy for the job, says analyst – The Tell – MarketWatch.

Shaq: Steve Jobs Wouldn’t Give Me the First iPhone

Apple is the largest and most successful technology company in the world’s history, but how did it arrive at that lofty perch? Did it create all the ideas folded into its shiny gadgets, or did it beg, borrow and steal them?

Of course, the answer is a little of both. That’s the point of this infographic from BestMastersPrograms.org, which used a variety of sources to arrive at this extensive collection of stats, illustrations and information about Apple and its explosively popular product line.

Steve Jobs liked to brag about how Apple has “always been shameless about stealing great ideas,” but the Cupertino company didn’t just lift all of its product ideas, did it? After you’ve traced every Apple product back to its humble origins, consider the possibility that Apple’s obsessive attention to detail wasn’t copied from many other companies.

For instance, who was Apple copying when it created its elegant, easy-to-open packaging? Which company was first to create a truly smooth-scrolling touchscreen? And taken to its extreme, we’re not aware of any tech manufacturer that ever created a video extolling the virtues of its product’s “chamfered edges.”

SEE ALSO: Everything You Need to Know About Apple’s New Products

What do you think? Let us know in the comments if you think the examples in the infographic are off-base or right on the money. Of course, this infographic leaves out all of Apple’s original creations. Which products or characteristics do you think Apple can claim sole responsibility for? 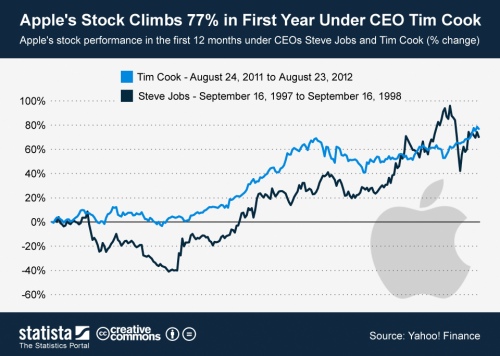 To everyone that believes the cool thing in business is rolling over people. Read this and re-think YOUR coolness.

He did it again! Steve Jobs and Apple raise the bar!

>The much anticipated introduction of the iPad2 took place today. Much more important, it took place with Steve Jobs. Because Steve Jobs was there and the product is good, it ended as it always does: Apple fans and competition are blown away, for different reasons of course.

For Apple fans who believe that Apple products are the greatest thing since sliced bred, it was more important to see Steve Jobs than seeing the new product. They will buy it anyway and were convinced of the usual quality already when version 1 was introduced. As some Apple product analyst said, the first iPad is still the best in the market. Anyway, the competition was more focused on the product. With the product again topping everything others have to offer, there was not much to do than leave with an open mouth. The features are great and the price didn’t increase.

Apple’s competition already has trouble to beat the price of Apple’s tablets, now they need to find out that the features as well are difficult to beat for some time. When I say some time, that means approximately a year or so. In technology, long term is a little shorter than in finance or banking for example.

Sometimes in summer we expect the new iPhone. There is no doubt, it will be good. If now the Wall Street Analysts and certain medias would focus on the fact that the products will be fine for some time, Apple shareholders will be able to sleep better. It will also help Steve Jobs to recover faster and not force him to appear at every event that actually should not require his attendance.

Apple and succession – Or, the Apple World after Steve Jobs

>A lot of talk currently about Apple and Steve Jobs. Rather than talking about the good news, investors, analysts and everyone else seems to focus on Jobs’ health and Apple’s succession plans. Some institutional investors turn up the heat and demand a detailed plan for the time after Jobs.

One can look at this from different views. If you are a pessimistic nature and your tendency is to boil down all success to one person, you will probably have sleepless nights over Steve Jobs’ illness and Apple’s future. You will demand a succession plan. If that will help you to get more sleep remains questionable. One can also focus on a more detailed view and give the company’s past handling of this kind of scenario a little more credit and focus on a few other upcoming things. With the second view, one can avoid dealing with trouble twice.

There are a lot of smart people at work at Apple. If you want to credit Steve Jobs alone for the successes of the past years, you are on the wrong boat, clearly. Sure, if you want to create a hype and earn some credits on the expense of Apple,  than this is a good chance to do so. How else can you do it in Apple’s case? The company is running smoothly and successful. The products have been absolute crackers and are, still, considered “must-haves”. With looking at the upcoming challenges for the products, you can’t make a name for yourself. Focusing concerns on one person of the caliber of Steve Jobs on the other hand, that creates more attention.

I can’t help myself, I just can’t believe that Apple hasn’t taken a look at the future. It is not that Jobs just got sick, serious issues are around for years. Honestly, would you believe that they haven’t given that scenario a serious look? Come on!

So, what would a published succession plan do for everyone? It would spit out a few names and the entire world would jump on it and would either be delighted, or would focus on a campaign to discredit possible candidates. Such incredible nonsense would shift the company’s focus from core business to fighting and justifying every move they make. It would just open an unnecessary battle field. There are other major things cooking that need attention.

Take a look at the competition. Everyone and their grandma is coming up with a tablet, or in some cases more then one. The smart phone market is crowded like no other. iTunes, like the Apple phones and tablets, experience a different infrastructure in the field of competition. For Apple, there is no time to open up another window of concern. These are valid issues and those should be treated as such.  With all due respect, who knows on whether Steve Jobs would be the man to solve all these topics or not? Besides of inventing new products, it is now the time to compete and defend terrain, rather than selling a product no one else has. A new game has developed. Focus!

News of the Day: Steve Jobs is sick. Really?

Today we receive the news that Steve Jobs is sick, again. After the news breaks, Apple stock gets a hit in Frankfurt, up to 8% down. Looking at the stock over the past few months and what analysts predicted, it represents quite a bullish scenario. There are price targets up to $450.00 out there. Not that Jobs’ sickness is a total surprise, he fights serious issues since 2004 and latest since his six month leave of absence in 2009, for a liver transplantation, the experts should be clear about his health. Beating cancer and going through liver transplantation is not dealing with a cold. We all should be aware of this, shouldn’t we?

So, are the bullish news a bet on his health, or are these serious analytical results of a company’s performance and near and mid term achievable results? Reading the news and looking at the market reaction overseas, it seems business facts are not the major driver here. ​Don’t get me wrong, I don’t want to downplay Jobs work, he is one of the best leaders in business. However, the last time he had to take a longer break​, there was no business problem visible. Tim Cook did a good job without interrupting any business flow. Steve Jobs doesn’t appear to be so full of himself that he ignores his health problems and therefore believes he is the only one at Apple. I believe there is a clear strategy in business continuity on the table. While the analyst world might not be able to evaluate and consider Jobs issues, I am sure he and the company are more aware of the long known facts and planned accordingly.
Let’s see what happens tomorrow when the market opens again. We will also get a look at Apple’s results and my guess is, they will beat the forecast again. ​For the current quarter, Verizon is now selling Apple phones, the iPad is coming with some enhancements and a few other much anticipated newbie’s are in the pipeline.​ Besides that, looking at the competition doesn’t reveal any major “oh-so-groundbreaking” new arrivals. Yes, everyone is now playing, or tying to play, in the tablet and smart phone market, but that is no news either. While a target of $450.00​ might be bullish​, a cut of 8% because of Jobs’ health problems does not make more sense. Hopefully today’s news is just an opportunity to buy the stock with a little bonus. ​